Intelligent Tank Sensor ITS 65 for Oils

BEDIA intelligent tank sensor ITS 65 is used to monitor the filling levels of oils of any kind. The sensor is able to automatically recognize and what kind of oil (hydaulic oil, engine oil etc.) is present and calibrates itself to it.

The ITS 65 also offers detection of the medium’s temperature via a Pt 10000, which is attached to the tip of the sensor. Due to their rugged design, high IP protection classes and a working temperature range from -50 °C to +150 °C (-58 °F to +302 °F) the BEDIA intelligent tank sensor ITS 65 is primarily used in the following areas:

The new tank sensor ITS 65 is characterized by a particularly stable, but light mechanical system specially designed for “Heavy Duty Applications”. The mounting flange and measurement tube are constructed from die cast aluminium.

This construction permits the insertion of tank sensors up to 1200 mm in length, without additional support on the tank floor.

The flange hole distribution is compatible with commercially used tank sensors. This means that this system can be used without expensive conversions.

The ITS 65 level measuring system is based on a capacitative measurement principle. A capacitor is formed by an electrically conducting plate and an aluminium tube. Depending on the level, the remaining air volume between the measurement electrodes varies. The resulting capacitative change is recorded and processed by the microcontroller.

“Capacitive Is Not Always Capacitive!”

A problem in capacitative level measurements is the varying permittivity of the various mediums. In general capacitative sensors just a single oil type can be correctly measured. This can lead to a measurement inaccuracy of up to 50 % if the fuel is changed.

The ITS 65 has a BEDIA patented sensor design, which makes it possible to determine the correct level, regardless of the oil type used. However, it is necessary to submerge the sensor element at least 50 % below the medium’s upper filling level.

The conductivity of the medium, due to the existence of water particle, will be determined and compensated for by an integrated microprocessor, which performs different plausibility checks across a wide range of calculations.

The intelligent electronics integrated in the ITS 65 tank sensors offers numerous value outputs and signal preparation options such as e. g.:

The measurement range, which can be programmed according to customer requirements, lies between 20 mm below the seal edge and 10 mm from the sensor end.

The output signal therefore corresponds to the actual volume and gives precise information about the tank contents.

An additional design feature of the ITS 65 is its freely configurable second output.

The analogue output is available as an voltage output with a range from 0 V to 10 V or as an PWM output.

The switch output is available as a lowside switch or a highside switch.

The switch output is short-circuit protected and suitable for 500 mA.

With inductive loads, a freewheeling diode must be switched in parallel to the consumer.

This is a SEO version of BEDIA Intelligent Tank Sensors ITS 60/65 Page 1
To view this content in Flash, you must have version 8 or greater and Javascript must be enabled. To download the last Flash player click here 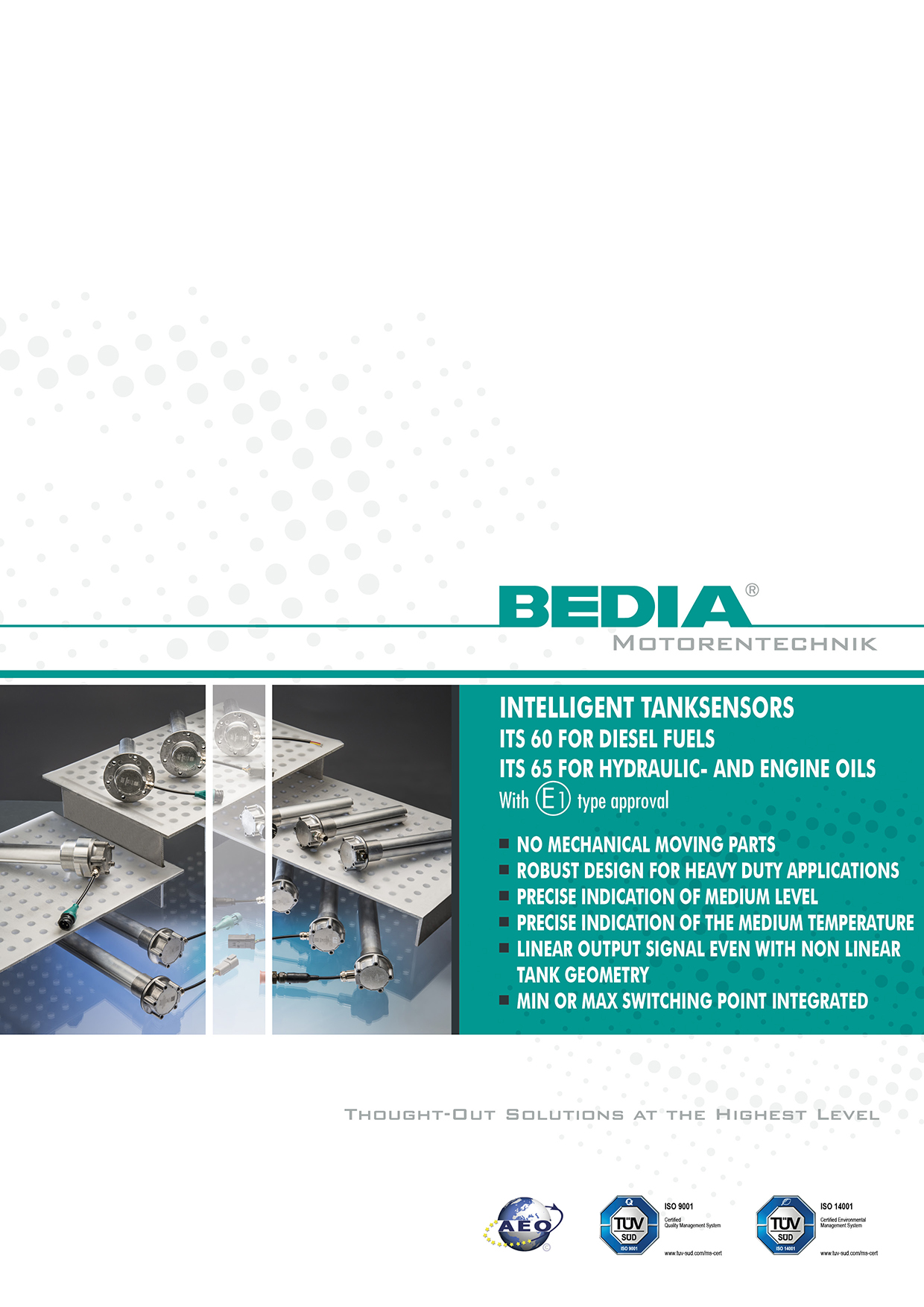